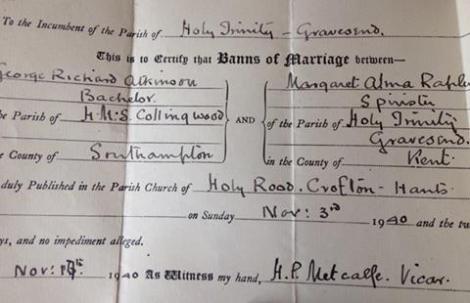 This is the original certification for Banns of Marriage called between George Richard Atkinson and Margaret Alma Rapley. It came to us along with some rather lovely letters which George had wrote to Margaret (or Peggy as she was known) whilst he was training with the Royal Navy in Fareham, Hants, 1940. The couple did marry and my research shows that there was a possible daughter, Jasmine A Atkinson whose married name could have been Turner. If anybody knows of this family, it would be delightful to get these very special items back home where they belong.